Get ready to play under the stars with our new tournament, Antares! 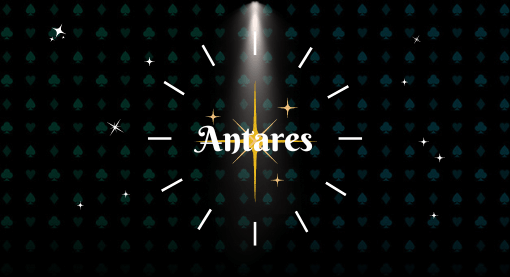 Are you ready to feel the heat of the competition? Antares, the red supergiant star, is known for its intense brightness and fiery appearance, and our tournament is no different! Grab your poker face and join us on the virtual felt as we blast off to victory in the Antares tournament. With 5,000 starting stack, 10 levels rebuy, and an add-on of 10,000 chips, you don't miss your chance to be a part of this exciting event and possibly walk away with a big win.

Don't forget the several 'STARGATE' satellites throughout the week available with buy-in amounts starting at only $0.55 cents!

Open the poker software (download version or instant play), go to the lobby and buy in directly to our Antares tournament - good luck!

Antares - $1500 GTD
Monday to Sunday - 8:05 pm Eastern
Buy-in: $20+$2
Blinds: 8 Minutes
Starting stack: 5,000
Reach for the stars with Antares, the red giant of the sky!
Antares, also known as Alpha Scorpii, is a red supergiant star that shines bright in the constellation Scorpius. With a radius about 700 times that of the sun, it's one of the largest stars known to us. It's also one of the brightest stars in the night sky, visible from most parts of the Earth. Its reddish color gives it a unique appearance, earning it the nickname "The Heart of the Scorpion" and the Greek name "Rival of Mars" because of its resemblance to the planet. Antares is truly a cosmic wonder to behold, next time you're on a tournament break, make sure to look out for this red giant.