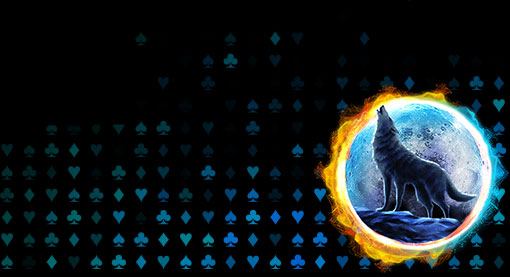 This amazing new slot by Betsoft will take our players to the awe-inspiring wilderness of North America where they can experience the life of one of nature’s top predators, the wolf. So if you are looking for a slot that will take you for a walk on the wild side, then look no further.

With its commanding looks and iconic howl, the wolf is one of the most inspiring and majestic animals on the planet. This animal is considered to be one of the world’s top predators, not because of its size or stealth but because of its ability to coordinate and hunt as a pack. In some Native American tribes the wolf represents loyalty, cooperation and strong family ties.

Loyalty for the wolf means returning a favor and you will get back way more than you bargained for with the Wolf Moon Fortune feature. This symbol can appear anywhere on the reels and for each fortune symbol you will be awarded with an instant win. To make things even better, the prize will be proportional to your bet!

No wolf is complete without its pack and when wolves work together the reward is much bigger. This feature is best represented by the Feather Talisman Free Spins. Once a pack of three or more Talisman symbols appear on the reels, a special free-spins round is triggered. And to show how much working together pays off, during this feature the game will pay both ways and double your winnings!

When it comes to hunting, the wolf has to coordinate or it will never catch the big prize - Just like with our Elemental Wilds feature. The mythical wild symbol will appear, coordinate and substitute the other symbols for you to get your biggest win!

Now that you know how the game works, be one of the first to play it! This great slot will be with us on the 27th of August, so get ready to join the pack.