Click here if you want to know more about the rules for Omaha Poker. 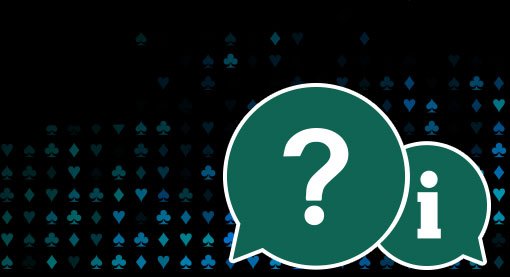 Again, as with Texas Holdem, the object is to win the pot that players invest in by betting during the various rounds but with two major differences. In Omaha, players create their best poker hand by using two of their four hole cards, combined with three community cards. The best five-card poker hand among those in contention for the pot wins.

The game of Omaha itself has variations. Omaha Hi-Lo uses the game details above but plays with low and high poker hand possibilities.

As per Texas Holdem, there are three betting variations of Omaha that can be played out in ring or tournament .

Below, you'll learn the basics of playing Omaha (High) online, within your home or in a brick & mortar poker room or casino.

How to play Omaha

In Omaha, a disc known as the dealer "button" serves to recognize which player sitting at the table is the dealer for that particular hand. The cards are dealt in a clockwise direction from the dealer button. Each time the cards are dealt, a new betting round begins. An Omaha hand starts when the first card is dealt and ends when a winner is declared. After each hand has been completed, as with standard poker rules, the "button" moves clockwise to the next active player. This is done because there is an advantage to having to act last and therefore each player will get his fair share of early, late and middle positions. This player will be considered to be "playing the button" for that hand.

The player to the immediate left of the button is first to receive a card and is required to post a small blind. The small blind is equal to half the lower limit bet rounded down to the nearest dollar (For example, in a $4-$8 game, the small blind is $4; in a $3-$6 game, the small blind is $3. The player to the immediate left of the small blind is required to post the big blind, equal to the lower limit bet (For example, in a $3-$6 game, the big blind is $6.). When a new player sits down at an Omaha poker game, they must either post the equivalent of the big blind or wait for their turn in the big blind. This prevents Omaha players from gaining an advantage by avoiding the blinds and jumping in and out of games. If you have missed one or both blinds, our software will prompt you to put in the correct amount. You can also wait for the blind to get to your position. This is called coming in on the blind. Both blinds in Omaha poker are considered live bets and therefore, according to poker rules, have the option of checking, calling, raising or folding when the betting action returns to their position.

First Round (Pre-Flop) - After the Omaha players in the blind positions put their blinds into the pot the dealer deals four cards called "hole cards" to each player. At this time each player can see his own cards but not those of his opponents. After seeing their hole cards, players now have the option to play their hands by calling, raising or folding. the first round only, a player bet) and still retain his hand. On the first round only, the betting starts with the first active player to the immediate left of the big blind. The minimum bet in this round is the size of the big blind. Thus in a $5/$10 Limit Omaha game, it would cost a minimum of $10 for the player who acts first to call in this initial round of betting. (The maximum dollar value and number of raises per round depends on of Omaha being played as described below.)

Second Round (Flop) - Next, three cards are dealt face-up on the board as the "flop". These three community cards are available to all active players. In this round play begins with the first active player to the immediate left (clockwise) of the dealer button, who has one of three choices, check, bet, or fold. Until there is a bet, each succeeding active player has, in turn, one of three choices; call, or fold. Bets and raises occur in lower limit bet increments. Therefore in a $5/$10 Omaha game the bet would cost a minimum of $5.

Third Round (Turn) - When betting action is completed for the flop round, the "turn" is dealt face-up on the board. The turn is the fourth community card in an Omaha poker game. Play once again begins with the active player immediately left (clockwise) of the dealer button and the same rules apply as the second round except that poker betting doubles from the lower limit bet to the higher limit bet. In a $5/$10 game, betting on the turn is done in $10 increments.

Fourth Round (River) - When betting action is completed for the turn round, the "river" is dealt face-up on the board. The river is the fifth and final community card in an Omaha game. Play once again begins with the active player immediately left (clockwise) of the dealer button as explained above.

Showdown - When all the betting is done, and if more than one player is still in for the pot, then the showdown determines who wins the game of Omaha. In Omaha, it is possible that one or more betting rounds not take place if only one active player has any chips left with all other active players having bet all their chips (all-in). When this occurs, any remaining community cards will be dealt face up and a showdown will take place. The last player to open or raise is required to show their cards first and anyone else can fold (muck his cards if he decides he has lost. Players who elect to fold do not have to show their cards. (i.e. muck his cards if he decides he has lost. the hole cards of all players who stay the showdown are included in the hand history, even if they choose to muck).The player with the best five-card hand wins the pot. In Omaha poker, players must use two of their four hole cards in combination with three of the cards from the board. In the event of identical hands, the pot will be equally divided between the players with the best hands. Omaha rules state that all suits are equal, so split pots are more common than in other variations of poker.

There are two different types of Omaha Poker games, made different by their betting structures

In Pot Limit Omaha, the minimum amount a player can raise must equal or be greater than the last bet or raise within the same round. The maximum a player may bet is equal to the amount in the pot including his call before making the raise. (Example; a player's call is $5 and the pot is $20, he may to a maximum of $50. His call of $5 brings the pot to $25 and he may raise the amount equal to the pot of $25, thus the raise is $25.)